Lessons Learned from the Season:

Q: What is one thing you did right this season?

A: A lot of spot and stalk bear hunting is trial and error until you figure out where bears like to be. A couple of things we did right were getting out and spending time behind the glass in new areas. We saw bears almost every day, and we primarily looked for big mature boars. Don’t narrow yourself down to one certain area, I feel that we do a good job of staying mobile and looking over a lot of country to find the right bear.

Q: What is one thing you did wrong this season, even if you did end up killing a bear?

A: This list could definitely be longer because we all make mistakes in the field. The biggest one of this year was stalking down on a bear in a narrow canyon. He was across the creek and I wanted to get to a certain shooting vantage. Justin and I made it into 250 yards with the bear directly across from us. Winded almost immediately due to the topography and where that bear was. It was definitely a preventative situation, I had a great shot opportunity at 350-400 in which I’m fully capable of making. The other option would have been going further downwind and coming towards the bear. Big bears are smart and definitely use the wind to their advantage due to poor eyesight.

Q: What two lessons from the season will you implement next year to increase your chances of success?

A: One lesson we learned a long time ago is glassing until dark. If you find a big bear late in the evening there is a great chance he will be in the exact location come morning. This has happened a handful of times to us on big bears. Another important lesson we learned is not spending too much time in certain areas that don’t have a lot of bear activity. It’s kind of obvious, but many times we stick to a spot only because we think it looks good, not because we’re actually seeing bears. To improve your success you need to put yourself in good situations to improve your odds. Our Ingrained series on our YouTube channel goes more into depth on what areas we look for that hold good bears.

Q: When spot & stalk hunting spring bears in a new area, what does your process look like for ID’ing your first area to focus on?

A: E-scouting plays a big role in the area we choose. We look for west-facing slopes that see the sun early spring and most of the day, green grass is key! Also, canyons that have large rock croppings, bears in Idaho typically den in rocky areas. Lastly, a good water source with dense vegetation in the drainage. Bears are very lethargic right out of hibernation and usually won’t travel far from the den to seek vegetation and water.

Q: Do the areas you typically find bears change throughout the spring season? (early season, mid-season, late season) If yes, expand on why they change

A: We pretty much have our timeline down of when we like to go on spot and stalk which is around the third week of April. If we have a good snow year it might change a little due to melt off. There are pros and cons to early, mid, and late, early and mid bears are really focused on grazing and relaxing in one area they feel most comfortable. As you get later into the spring season boars are starting to look for sows to breed. We are most often sitting the baits this time of year.

Q: Can you give a short run-down on your strategy for hunting bears over bait?

A: Topography plays a big role in selecting a bait site. We like somewhat of a spine ridge with a flat area on top. This allows the bait smell to travel all over the mountain when thermals change. We start baiting about three weeks prior to even sitting at the bait site. Evenings have been our best luck for harvesting mature bears, thermals are usually very consistent and we see our bigger bears more active in the evenings or late at night. Since we are setting the bait site in May it is generally cooler in the evenings, which I would say is a motivator for bears to get up and move.

Q: Spotting scope or binos on a tripod? Or both, dependent on where you’re hunting?

A: We are running both! Having the spotter helps us really field judge a bear and if he is mature and worth going after.

Q: What are your top two glassing tips for finding bears?

A: Start early morning on green open hillsides or if you are hunting scattered timber look for them to be up grazing. Be patient, we always make the joke that bears literally pop out of the ground. Give your area at least a morning and evening before switching locations.

Q: What is your favorite way to prepare bear meat?

A: People who haven’t tried bear meat from a spring bear are truly missing out. I like to cut the backstraps into steaks for stew meat or stuffed with cream cheese and wrapped in bacon. The rest of the meat I grind into sausage, this is used in tacos, pizza toppings, breakfast burritos, calzones also referred to as “Bear Bread”. Another thing I will definitely be doing in the future is saving the fat for rendering and using as cooking oil.

Biggest thing to remember when preparing bear is the internal temp of the meat. I like my internal temp to be at 165. Bears are carriers of trichinosis and can make you extremely sick if not prepared correctly. 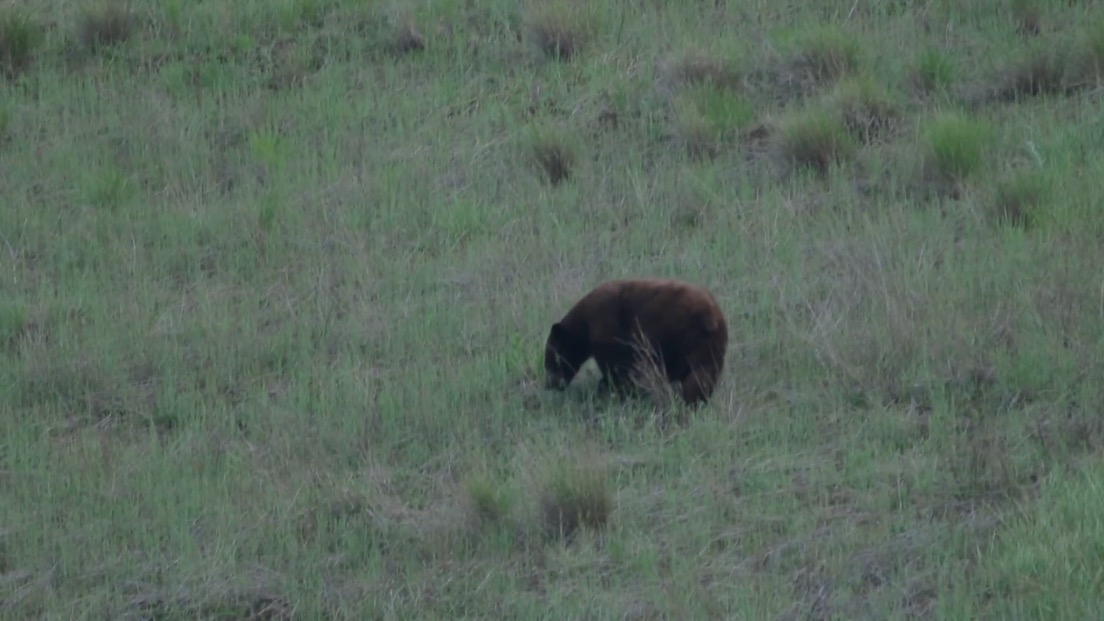 Q: What are your go-to Crispi boots for spring bear hunting?

A: Out of the three of us we run the non-insulated Briksdal, Lapponia, and Colorado.

Q: Does your decision on model change depending on conditions? Area? Style of bear hunting?

A: Usually with bad weather such as rain or sleet bears will hunker down or stay in timbered areas. This changes our approach to finding a more dense area and glassing a lot vs more open country that we prefer to hunt. We like to spot and stalk around the 3rd-4th week in April. The weather is usually nice with cool days and little to no precipitation.

A: We typically hunt more rugged terrain during bear season so I like to run a stiffer boot that has more ankle support. Each of our guys are different in what they like to run. Weather and temperatures are pretty close to the same unless we have an unexpected snow storm and cold temps in September that would make me switch to an insulated boot.

Q: Scenario: you get a new pair of Crispis one month before bear season begins...What does your process of getting those boots ready to hunt look like? (Break-in, conditioning, etc.)

A: My break-in process that I have found to work the best is taking my old insoles out of a seasoned pair of boots and putting them right into the new pair. This has lowered the fatigue on my feet and allowed for faster break in. I really like to wear a new pair of boots in really wet conditions late winter or early spring, it helps soften the leather and really allow the boot to somewhat mold to your foot.

"These are the important things in our lives:  God,  family, careers, hobbies, and dreams we hope to accomplish one day. In order to be successful in these things, we make it a top priority to work harder today than we did the day before. This is Top Priority Hunting, a group dedicated to producing high quality hunting films and stories for those who share our passion for the outdoors and everything it has to offer. Particularly, archery hunting the mountains of Idaho, where we all call home."

Justin can’t remember a time when he didn’t have a bow in his hands. He has been hunting as far back as he can remember. Big game is his passion, but he enjoys hunting anything and everything he can. It’s a passion he was born with and hopes to pass down to his son, Jackson, and daughter, Jaycie. He loves spending time with his “top priorites” God, his wife Aubrey, and his kids in the beautiful outdoors of Idaho, where he calls home.

Jeremy has always had an unquenchable thirst to be outdoors and closer to nature. Whether on foot or horseback, Jeremy enjoys it all.  He was in his early twenties the first time he was blessed to go hunting.  It made his love for the outdoors grow. Jeremy married his best friend and sweetheart Corinne. They have four beautiful children, three boys and a girl. Teaching them how to hunt responsibly and effectively is a priority for him. With every hunt and every harvest of game,  he remembers the gift of being outdoors is a gift from God.

Garrett grew up in a hunting family. He hunted with his dad well before he could hunt for himself. His passion has always been hunting and being in the mountains, no matter the outcome. He grew up in the small town of New Plymouth, where he will always call home. Garrett currently resides in Parker Colorado working as a superintendent. Garrett is the youngest member of the Top Priority Crew and is the social media director of the company. In his short time with the crew he has taken many animals with his bow and even a few with his rifle. Garrett has enjoyed hunting with a dedicated group of guys who love sharing their hunts and experiences with other people.